Skip to Main Content
It looks like you're using Internet Explorer 11 or older. This website works best with modern browsers such as the latest versions of Chrome, Firefox, Safari, and Edge. If you continue with this browser, you may see unexpected results.

Whittier College Archives represents a record of campus life throughout the years. Search the collection using the library CATALOG. Note: We are currently assessing this collection. Finding aids will be made available soon.

Revisit the history of Whittier College's websites at the Internet Archive Wayback Machine.

The Quaker Campus has been in continuous publication since 1914. The Library has digitized many issues of the Quaker Campus which are now fully searchable in our digital collections.

Property and literary rights reside with the Wardman Library at Whittier College. For permission to reproduce, publish, or to view original issues please contact the library.

The Whittier College Authors is a collection of Faculty publications. 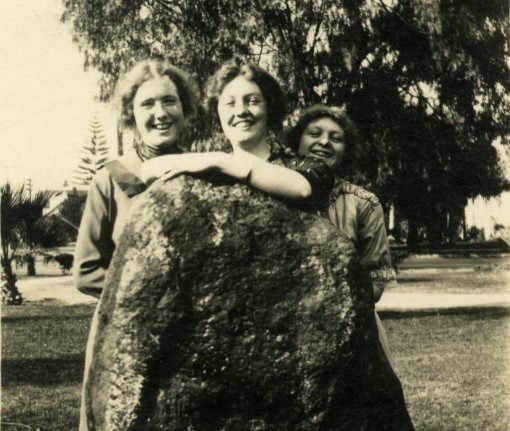 This exhibit from the Whittier College Archives celebrates some past rituals from a unique chapter in the College's history.

Early one morning in June 1912, the Rock was brought to campus by three members of the class of 1912: Frank Crites, Nofle Renneker, and Milton White. With the help of Austin Marshburn ('10), they lugged the tow-ton granite boulder eighteen miles to Whittier via horse-drawn cart. When the Rock was placed on campus it was promptly buried by the Junior class in retaliation. Photographs in this exhibit come from the scrapbook of Gertrude Cox ('12) and depict the Junior-Senior trip to the San Gabriel Mountains the year before they brought the Rock to campus. These never-before-seen photographs likely capture the first time the Class of 1912 encountered the Rock.

Until the 1970s the link between the freshman class and the Rock was "set in stone." During Orientation Week, freshmen followed a strict code of conduct outlined in the Student Handbook. These rules dictated where freshmen could go, what they could do, and what they could wear. Freshmen wore beanies labeled "Frosh", unfashionable jeans, and placards that listed the rules to show their "lower class status." Known as "greenies", freshmen could be commanded by upperclassmen to drop everything at any time and sing the alma mater while touching the button on top of their hats. This friendly hazing culminated in the Frosh-Soph Competitions: the winning class's year was painted on the Rock for an entire semester.

Whittier College is rich with traditions including painting the Rock that has made student life on campus exciting to this day.